skip to main | skip to sidebar

A Room With A View Memories

As we walked, observed, felt and smelt our way around Florence glimpses of the book came back to me. So here are my A Room With A View Moments from our trip.

I think they were more Eleanor Lavish, than the Miss Allens, even though there were two of them. Two American women living in Florence at the bar in our hotel. Struck up conversation with a couple by saying
"Can you answer a bet - are you on honeymoon?" After that they proceeded to give travel and restaurant advice.

Mr. Eager would have been the character to over hear this comment and retell it countless times.
A British school girl half way around The Uffizi, I think on an art trip as they all had sketch books, saying to her friend as she looked at a Madonna painting.
"Who is this Madonna? Is she our Madonna? The Madonna?"
(We think she meant Madonna Louise Ceccione)

A huge thunderstorm with great cracks of thunder and lightening. Thankfully we were safe in our hotel room and not out in a carriage. 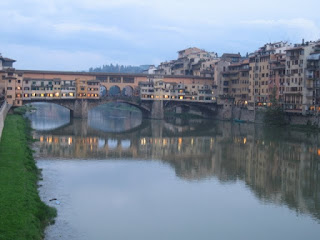 Being in Florence with the man I love.

Ooh how lovely more stripes on the page...
Thank you for taking the time.

Joan Hunter Dunn
A sip of this and a nibble of that. A collection of favourite words and thoughts.

I hope to credit all images. If I've miscredited an image, or you'd prefer me not to use yours then please do let me know and I will amend.
Thank you for visiting and hope to see you again soon.